August 28, 2010
On Friday night, more than 2000 students gathered for the final campus outreach event at the University of Rwanda.  Throughout the week, we have been giving teachings at the University focused on equipping them in their calling as Rwanda's  new generation of leaders.


For the final message, I spoke on Joshua's call in Joshua 1:1-9.  I highlighted the fact that Joshua's journey was one that progressed from success to significance.  When we encounter him in Joshua 1:1, Joshua is described as Moses' servant.  But at the close of the book, he is described as the servant of Yahweh (Joshua 24:29).
Drawing from the openning verses to Joshua, I highlighted the fact that God's call to Joshua is three fold.  He is being called by God to embrace his past rather than dwell in denial.  Hence God's reminder that Moses is dead.

Secondly, he is being called by God to surrender or release his past into the hands of Yahweh hence God's reminder that Moses is dead.  Finally, he is being called by God to embrace a new future and vision for his life hence God's command to arise.
These, I said, are partinent steps to the nation of Rwanda which is scared and wounded by a horendous history.  Yet rather than allow the past to cripple their future, God's three-fold call releases them into a new future of hope and meaning whose author is God Himself.


I further warned them to be on guard in three critical battle fronts of which God warns Joshua about.  The first is the emotional front.  Eight times in nine verses, God warns Joshua against fear.  His call is to be bold and courageous.
The second battlefront is intellectual.  God warns Joshua to guard against intellectual pride and arrogance but also against decay and disinterest (1:8).  Finally, God calls Joshua to watch the moral front.  In 1:7, God asks Joshua to be careful to do according to all the Law that he has been commanded.  We ended the evening with a time of prayer for the students and for their University.
Upto this point in our mission here in Huye, over 40,000 people have participated in our events.  More than 10,000 have prayed with us to receive Jesus Christ into their lives as the Lord and Savior.  We Give God the glory.
We have three events left to wrap up this week of intensive mission.  First we are hosting the government leaders for a dinner in a couple of hours.  Then tomorrow morning we have church ministry as well as an outreach to the city prison.  Nearly 3,000 prisoners are housed at the prison our team will be visiting for ministry.
Finally all the churches will end their servicesby 11:30 AM and then join each other for a Jesus match through their city streets.  The processions from the different directions of the city will end at the local stadium grounds where we will hold the final rally.
Pray for me as I prepare to preach one more time to the expected huge crowd of people coming out to the final crusade on Sunday afternoon.  As many as 10 thousand people are expected to attend the closing rally.
A neat story we heard today is that among the 10,000 plus people who have come to faith this week are five well-known witch doctors in the Butare area.  One of them, a lady, has consistently come to the outreach meetings in her neighborhood the last three days.  Those who practice witchcraft are usually highly feared in several African cultures including here in Rwanda.  We give God the glory for continuing to set His people free from the bondage of Satan and his powers. 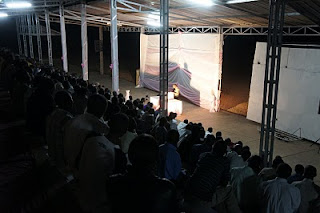