In Bujumbura, a City in the Valley


In the Gospel of Matthew, Jesus speaks of believers being like a city on a Hill. He says, "A city set on a hill cannot be hidden." Such a city is visible from a far.

That is what we are. In following Him we become contagious, combustible, dynamic, visible, and engaging to the world. 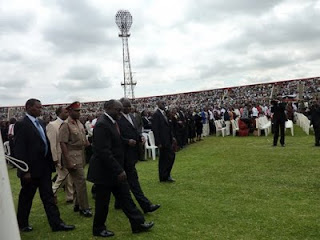 Well, it is two days now since we arrived in Africa. Yesterday was quite an awesome Sunday. We joined worshippers at Christ is the Answer Ministries (CITAM), Nairobi, Kenya for the worship service. The Bishop of CITAM, Boniface Adoyo and his wife Addah and many of his pastors are wonderful friends of ours. Senior Pastor of Nairobi Pentecostal Church, Valley Road, the largest of the congregations under CITAM Kennedy Kimiywe had invited us to join them for the service. They are celebrating 50 years of ministry in the city of Nairobi. Kennedy is also accompanying us to Bujumbura as part of our speakers panel.


They held one grand service at the Nyayo soccer Stadium attended by most of their 60,000 members. Aong the guests for the occasion was Kenya's President Mwai Kibaki and several of his cabinet ministers, members of parliament, civil servants and the Nairobi Business community. Looking at the audience as quite a sight to behold. CITAM are definitely shinning the light of Jesus Christ all around the country of Kenya. SWIM is honored to be a partnering ministry with CITAM in Africa. 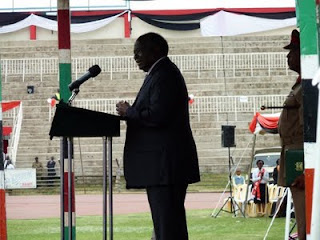 In the meantime we are here in Bujumbura. The weather is hot and humid. Significantly uncomfortable. Thank God we have air conditioning in our hotel rooms. The city is set in a valley. Several hills overlook it. The city itself overlooks Lake Tanganyika. It speaks of great potential that remains largely untapped. The people are kind and polite. But they need to shed off the valley mentality and build their lives on a hill.


Tomorrow morning we kick off the Leadership and Governance conference. There is great energy and passion from the local Christian leadership, coming in large numbers. We will have more than 200 pastors, business and community leaders in attendance. I am told there have been as many as 400 requests from many pastors from neighboring Rwanda and Democratic republic of Congo to come. But we did not make room for that many on our budget. So we are sticking with the plan as much as possible. 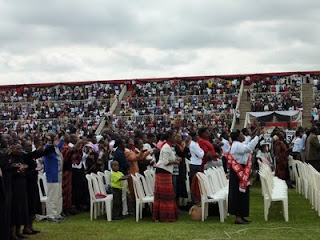 Initially Burundi President Pierre Nkurunziza was scheduled to open the conference. However, due to pressing political responsibilities he is sending his minister for Good Governance and Local administration Martin Nivyabandi to open the conference. We will visit with the President a little later in the week. They are requesting for prayer as they have had some wrangling between political parties. That is why the President is not available tomorrow. Pray for us and come back to tomorrow to know how it went.


I promised you the other day to tell you what God did. Two months ago I applied for my Green Card with the U.S. Department of Homeland Security. The minimum it takes is at least three months to process. So obviously I was late if I wanted to receive it ahead of our travel to Bujumbura. We, however, did not have the needed funds to apply for it earlier. My wife and I had agreed that we were not to use our credit cards but rather wait on the Lord to provide first.


When we applied, we requested for an expedited release of a travel document that would allow me to leave and re-enter the U.S. without having to forfeit my application. For the two months it wasn't forthcoming.

By Thursday last week, with one day left to go, I still did not have it. So my wife and I did some research and found out that there is a local USCIS office in Bloomington by the Minneapolis/St. Paul International Airport. We went in and requested if they could process one for us. The officer we talked to denied us. For a moment we didn't know what to do. I could not get back into the U.S. without that document.


Then the Holy Spirit reminded us that God has already made a way for us and his favor rests on our lives. It was already obvious through the provisions we have experienced. He whispered to me to call Steve Wareham, the MSP Airport Director and explain to him the situation. We did.

Steve then called the Director of Homeland Security at the MSP airport, who then called the Minnesota State Director of Homeland Security and requested them to issue me with the travel document. The lady director complied. I was given her direct number and called her. She was very apologetic for what I had undergone, being denied the document. She personally came to receive my wife and I when we went back. The officer who had denied us was called back from his lunch break to process it immediately. Within 20 mins, we had the document and were ready to go.

So, I am coming back to Minnesota. Guess who is most delighted…My wife (and baby) of course! YEY! Thanks be to the Lord our God who goes before His own children to part the Red Sea. Uftah!!