We thank God for what He is doing here in Bujumbura. Over the last two days we have ministered to Christian leaders from across the region. On Tuesday, we had 150 leaders attend the conference at the Kings Conference center. On Wednesday, 206 attended. 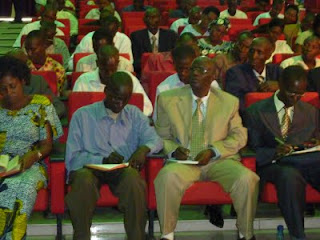 Some of the leaders have travelled by road for 24 hours from Goma and Bukavu in the Democratic Republic of Congo and from Rwanda into Burundi for the conference. I am totally blown away by their faith, dedication, commitment, and desire to be part of what God is doing in this region of Africa.

Initially, Burundi's President Piere Nkurunziza was invited to come and open the conference. He, however, send his minister for Good Governance Hon. Martin Nivyabandi to do so on his behalf.


We are informed that the country's political parties are having tension and disagreements that could potentially turn violent and derail the recent peace accord. Consequently, the president has called for a weeklong retreat for all the political parties so that they may iron out their differences. He is preoccupied with that. The country has recently emerged out of a civil war. The last rebel group signed a peace accord with the government two months ago. Pray for continued stability of this nation and for the healing and restoration of its' people.

When Martin opened the conference yesterday morning, he told us that it is a real point of praise to God for the five rebel groups that had been fighting with the government to have finally signed peace agreements to work with the government. Many of the formerly rebel forces have been integrated into the regular army. "In Burundi, we have no choice but to look to Christ for our solutions as a nation," he added.

Due to the on-going retreat called by the President, we will also not be holding the Executive leadership conference as initially planned. It was to be attended by the President and Burundi's members of parliament. It is, however, a possibility that on Sunday night we may meet with President Nkurunziza at the presidential palace.

Dan Dye and Steve Wareham as well as Pastor Ken Kimiywe, who travelled as part of our team from Nairobi, have done a fabulous job ministering to these leaders in the area of Leadership. The energy in the room is palpable. There is clearly a connection between the speakers and the audience during both days. We are all healthy and none of us has experienced any sickness.

Personally, I have exhorted the leaders in the opening sessions each day to shine the light of Jesus Christ in their communities. I have pointed out a number of the issues that they are dealing with in their leadership contexts. Our desire as a ministry is to help them address some of those issues throughout the conference.

One specific issue that seems to get the attention of everyone, including the government minister, is that of the big-man syndrome. It appears that many leaders and several church pastors in the city (and the region) set themselves up as big men. They do not interact with the common folk who are mere mortals. This is of course counter to the Transformational leadership model that this conference is addressing. 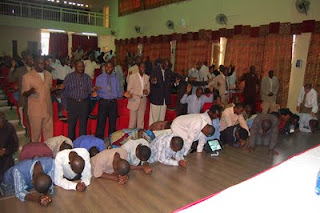 Then there is the issue of accountability. Some of the leaders seem to excuse themselves from the necessity of being accountable to their congregations or others under them on cultural grounds saying it makes them too vulnerable. We addressed the issue and hopefully it caught on well.

We have ended the conference with a wonderful time of prayer and altar call response (see pic). We prayed for deliverance, strength, and fresh anointing for many of the pastors and leaders present.

Earlier in the day we also prayed with a gentleman who we were told has come to Christ last week. He was one of the two Muslim Sheikhs at the local Mosque. He says that a week ago the Lord appeared to him. He then gave his life to Christ. But as a result he is suffering tremendous persecution. His Arabic wife and children have been taken away from him. His properties have been burned down and his life is on the line. He has nothing left and he looks very scared. Pray for him.

Well, the Festival of Hope for the city starts today, Thursday night. A moment ago I got awakened from sleep totally exhausted in my spirit and had a strong urge to pray (it is 2:00 AM as I am writing this). There are strange powers of darkness over the city that we are going against. It seems like we are specifically going against the occult. It is, however, also clear that God intents to set His people free from the oppression. Please pray with us.
More later.