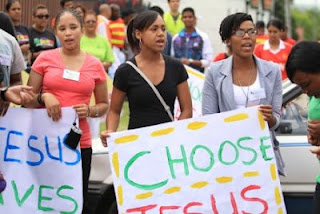 The shoppers on Langilabele St in Pietermaritzburg, South Africa, were recently presented with more choice than normal. A group of over 100 young Christians, singing and dancing, marched down the street declaring “Choose-Zikhethele – the choice is yours!”

The young people, representing church youth groups from around the city, marched from Pine St, down Langibalele St, to the Church of the Vow. Dancing and singing they stopped four times at key points to pray for their city. They prayed God’s blessings on those working in education, business, provincial government, the municipality and the taxi associations.

The march was significant in that it represented the next generation of young leaders challenging citizens to make the right choices that would determine the future of Pietermaritzburg- "the City of Choice."

In between singing hymns, the young people prayed that their business and political leaders would make good choices – honesty over corruption and prosperity rather than poverty, to name just two. At the Church of the Vow they prayed for unity in the city and amongst the churches. Throughout the day they called on the city to choose Jesus
.
The young people are part of the “Choose-Zikhethele” mission 2012 to Pietermaritzburg, facilitated by African Enterprise in partnership with SWIM ministries and the churches of the city of Pietermaritzburg. Evangelist Sammy Wanyonyi will be preaching during the mission.  The evangelistic events start on August 12th 2012 and will last through the 19th of August. 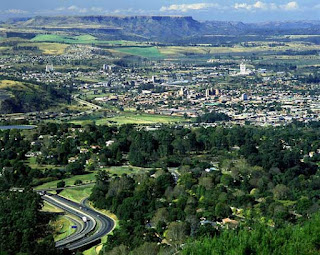 It involves a long-term commitment by city churches to strategically serve the city in every aspect of it's corporate life. Pietermaritzburg's Church leaders hope to see transformation in the lives of individuals, families, key institutions like the municipality and the broader city itself.

Support us in our evangelistic efforts to Pietermaritzburg and to Rwanda this summer with a financial gift today by following the donate link on the right hand panel of this blog.