October 27, 2009
Sixteen years ago I worked for an airline catering company in Nairobi.  This was my first job after graduating from High School and while attending college (Wow, it has already been that long!).  Every lunch hour, the working area would shut down and everyone would go to the cafeteria for lunch.

Instead of going to eat, however, I often took that lunch hour and would spent it in fasting and prayer.  I would find quiet space, mostly in one of the empty coldrooms and there I would spent 30-40 minutes on my knees in intense prayer.  It was a habit I practiced most of the two years I worked there.

One day as I was tacked away praying, unbeknown to me the company's Chief executive and his personel manager were going round inspecting the facilities.  When they came to the area where I was, I was praying with such deep intensity that I did not notice or sense them.  They saw me praying and chose not to interfere.

They continued to inspect the facility and returned about ten minutes later.  They waited for me to finish my praying.   It just happened that that day I had purposed to pray for all the leadership of the company, and the workers and they heard me whispering their names to God.

Twenty minutes later I stood up to leave the prayer room but as I turned around to exit, lo and behold the personel manager was standing at the door.  He looked furous.  He asked me to follow him to his office.  As soon as we reached his office, without saying a word he picked up the phone and summoned the trade union representative who arrived about five minutes later.  For a moment it looked like I was getting fired.

He asked me whether I knew this was company property and not a church.  But then before I could answer, there was this calmness that came over him.  Suddenly he said that sometimes he prayed too.  But rather than pray for thirty or forty minutes, the length of time he had waited for me to finish my prayer, he normally looked around and if there was no one looking, he would bow and pray for about five minutes.  The initial tough exterior was replaced by a struggle to keep back the tears.

During that same time, a word had already gone out among the 800 employees that I was being fired.  Most of them knew that I was born again.   They had noticed my personal values.  In fact a few of them mocked me for it.  But still, there were several others that were Christians too and wished we had a work-place Bible study.  But the environment was so intimidating for something like that.

To make the long story short, to the trade-unionist's surprise, the manager's own, and everybody else's I wasn't fired.  God was giving me my own 'Daniel in the Lion's Den' moment.  Sensing the change in the tone of the manager and knowing that God had come to my defense and help, I took the opportunity to boldly and formally request for a room for me and other believers in the place to meet regularly for Bible Study and prayer.

Until that time, the employee's culture was one of dishonesty and thievery.  I had been praying for a change of these that afternoon and I took the chance to persuade the gentleman that there would be benefits to the company if Christians would be given space to be who we are in the company without intimidation. 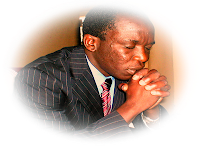 After a couple days' consideration, our request was granted and a small group of us, about 20 in number, started meeting openly for prayer and bible study.  Since the story had reached all the other employees, many were curious to know about my faith which I gladly shared with them.  To the glory of God, many of those who were previously dishonest began to give their lives to Christ and to transform in their attitudes toward God, life, and the company.

Three months later, I left the company to become a manager with Air France.  But the culture was on its way to transformation.  Infact my last day of work I had two colleagues give their lives to Christ.  They then insisted on taking a picture with me after seeing what God had done.  I still retain that picture to this day and pray that they continued on in their faith.  On our way home on the company bus several others demanded that I address them and tell them about my faith.  Of course I was glad to do so.

Interestingly in my new role as the airline manager and representative, I got to work directly with both that general manager and personel manager as a client to their company.  Sometimes when I dropped in at their offices they got tense thinking maybe I had a complaint about the quality of service or something...strange how tables can turn so quickly at times.

Anyway, I am sharing this to emphasize the impact of prayer both in our private lives and public.  Having a healthy habit of prayer is essential to living lives of breakthrough.  No one illustrates this better than Daniel, the Statesman prophet.  Throughout the book of Daniel, we find him fasting and praying.  Infact it is his prayer habit that gets him in trouble with his colligues in the first place (Daniel 6:5, 10-13).  But it is also his praying that shut the mouths of the Lions and elevated him to the place of honor and authority in the empire of medo-persia (6:20-28).

This week here at SWIM ministries we are taking time to fast and pray for breakthrough in regards to our ministry budget for this year and plans for next year.  Due to the tough economic times, giving has been slow and at this point we stand nearly 25% behind what we budgeted for 2009.  But we believe that God is capable  of openning the doors that need openning and to allow us to close this financial gap before the end of 2009.

I will be reflecting on this subject of prayer and fasting based on Daniel and the impact it can have over the next few posts.  Hope you are inspired as you read along and pray with us.