The View From the Window of My Hut

September 22, 2009
The pop band Sixpence None the Richer gets its name from a line in C. S. Lewis; he says that we are like children who are given sixpence by their father so they can go buy him a present for his birthday. He is none the richer for our giving, but we are.

When you consider the mystery in creation and then realize that God has given us all this majesty so in turn we may give Him praise and worship, you can’t help but marvel. Our worship does not add anything to the fact that He is God. Yet we grow richer because of it. 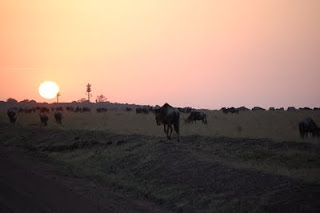 This past week, coming home from Burundi, our team spent a couple days in Kenya to debrief and to rest ahead of the long flight back to the United States. We visited the world-famous Maasai Mara for an African Safari experience. We stayed at the Mara Serena Safari Lodge.

Here you are received by a very friendly guest officer named Pamela, get to stay in a "Maasai hut" (tongue in cheek...inside pic above), have breakfast in the wilderness as you are watched by 5 ton Mara River hippos (can you see hippos in pic I took of Dan and Steve below?), get an occasional visit from a friendly but annoying baboon if you leave your door open, and take in the splendid sunrise. 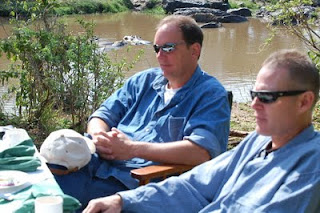 The lodge rests on a forested hill that sticks out like a footstool overlooking a serene plain below. The view is reminiscent of an ocean, except that instead of the blue waves, you have the golden grassy field stretching for miles and miles.

Dotted with occasional acacia and the candelabra trees, the peaceful-looking grassy plain belies the bustling and often vicious life hidden between their whistling blades. Venture out into the grassy plain and you discover the amazing splendor, wealth, and majesty of God.

In one corner of the plain we see a pride of lions. Thirteen in total, they lie there fed and unperturbed by the tourists (us) jostling for a better angle to capture their majestic frame. Then in a moment I see a quality in these beasts that is very much human. A mother lioness comes walking toward the pride with a young cub, perhaps two or three days old. Then all thirteen lions stand on their feet and move toward the lioness and cub in a welcome gesture, including the Alpha male (can you see cub in pic?). 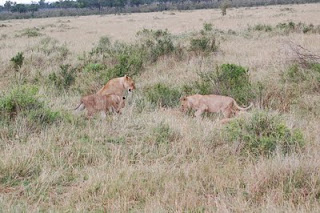 For a moment there is an excitement in the air as the little fragile fellow presses his way through the thick and thorny grass under the protective watch of his mamma. The pride approaches tenderly. One by one, several of them with great care sniffle on the little fellow. It is as if they are saying, “welcome into the family, little Simba!”

Haven’t you seen something like that among humans when a newly born baby and mamma come into a setting? There is the touching, the smiling, the laughter, the congratulatory words, the celebration of new life, etc!

In another corner we see a herd of elephants. Mother and their young in toe, they strut along in a line. They make a perfect formation. Who made these beasts of the Savannah? Who fashioned their amazing trunks. Who owns them? 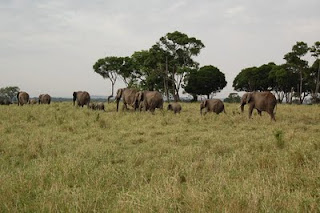 And then as we move along we are greeted by a stunning view. A marvelous panorama of God's genius acts in nature.  A tower of Giraffes lies on the grassy plain. Their long necks stick out of the ground in picturesque fashion. I try to count them. One, two, three, four...twenty-one in number. Coupled with the amazing background of the acacia, the candelabra, and the wildebeest, the sight is spectacular. 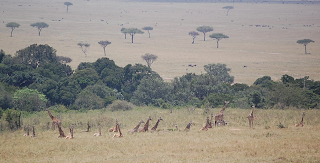 Speaking of the wildebeest, who teaches them to cross the treacherous Mara River on schedule each year? Who warns them of the danger that lies beneath its waters in form of hungry crocodiles? It is now four O’clock. Our driver informs us that it is the wildebeest river crossing time. As we head to the banks of the Mara, we notice several hundred other spectators gathered. Each is jostling for a good vantage point. They have come from all-over the world. We join in. 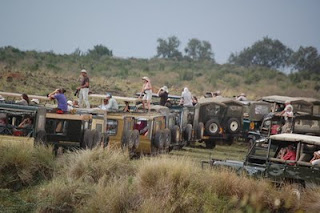 A few meters away, a herd of wildebeest keeps filing in. None of them is crossing yet. They are in the thousands. They keep building up on the bank of the river. These clown-like creatures are quite a sight to behold. They have the head of a buffalo, the tail of a Zebra or horse and the legs of an antelope. Asymmetrical, they seem to have been made from the leftovers of the more stately creatures.

Beneath the waters, a bask of crocodiles positions itself for the catch. It is party-time in croco-land. That is if they will be lucky to escape with their jaw intact following the kick of the wildebeest.

Finally, all the players are in place. First the Mara. Secondly, the wildebeest in the thousands. Thirdly, the lacking crocs beneath the waters. Fourthly and finally the tourists. Camera on, and…action! 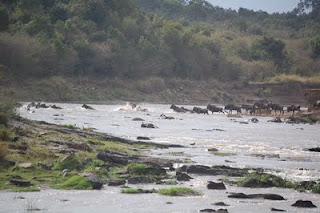 The phenomenon is breathtaking. Who could have scripted such a show on earth?

Finally they are all across the river. The crocs are not so lucky today because of the low levels of water. In the thousands, the wildebeest march on…ever onward in these treacherous plains as they head toward the neighboring country of Tanzania. 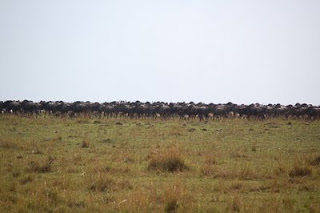 My heart can’t help but ponder with the Psalmist (50:1-2; 10-12): “The Mighty One, God, the LORD, has spoken, and summoned the earth from the rising of the sun to its setting. Out of Zion, the perfection of beauty, God has shone forth…All the animals of the forest are mine, and I own the cattle on a thousand hills. Every bird of the mountains and all the animals of the field belong to me." Says the Lord. "If I were hungry, I would not mention it to you, for all the world is mine and everything in it.”

John Greenleaf Whittier said it in a hymn: “All things are Thine; no gift have we, Lord of all gifts, to offer Thee. And hence, with grateful hearts today, thine own before Thy feet we lay.” 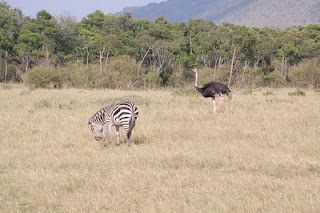 I wish I could talk of the Hyena playing hide and seek with the Lioness, the dancing weaverbird, the amazing sunrise, the beautiful Zebra, the gigantic Ostrich, the gazelle, the Warthog, the Secretary bird, and all the hundreds of species of animals and birds that lie beneath the grassy Mara. One thing is for sure though…God owns them all. That is the truth. 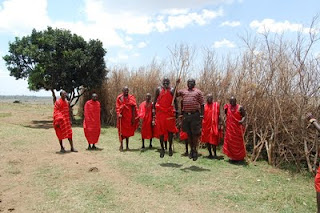 Before we leave the Mara, we visit a Maasai village.  Afterall they are our brothers and sisters.  Here, they teach us a Maasai jump. And then we head out onto our small plane.  Off to Nairobi we go.  But deep in my heart, the songs of the wilderness still reveberate.  Embeded therein is the song of praise and worship of our God.  How great is our God!