Five Days and Counting..From the Fringes to the Center 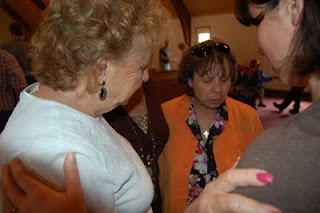 Yesterday I spoke in the Sunday service at Grace Church of Forest Lake. I chose as my text Joshua 2:1-22, which tells us the story of the harlot Rahab and Joshua's two spies to Jericho. At the end of the message, I saw something that is becoming more and more rare in our American churches; penitent souls crying out to God at the altar in earnest desire for personal transformation.

In the story, Joshua sends two spies to check out the city of Jericho. The courageous young men find their way into the city and are welcomed into the harlot Rahab's residence.

Being a woman, unmarried, and engaged in harlotry, Rahab lives on the fringe of society. Her house is literally on the edge of town (v. 15), the most vulnerable place one could live in ancient times. She is vulnerable to marauding gangs of enemy invaders. Her trade places her on the fringes of the social hierachy. Her gender and marital status place her on the fringes of political and economic influence and power.

Yet in all of Jericho, she is the one person that God counts to be most righteous. In an act of sovereign grace, God sends the two spies to her door. Her actions reveal a woman who was open to grasp the one chance left to escape God's judgement.

While everyone else in Jericho, including the king, saw the spies and Israel as instruments of divine punishment, she saw them as instruments of divine grace. And so she welcomed them, fed them, and hid them from those that would have harmed them. These heroic acts are the beginning of her amazing transformation and movement from the fringes to the center. Even the king of Jericho notices and sends emisaries to her house.

Through her actions of faith, she moved from the fringes of society into the very center of God's most important dealing with humanity on that day and throughout the subsequent generations. She ends up becoming part of the geneology of Christ. Today, all of us who are followers of Christ are beneficiaries of her heroic acts of faith.

There are a number of things that she did right that contributed to her movement from the fringes of human society to the center of God's plan for humanity.

Firstly, Rahab knew God's revealed Will. In verse 9 she reveals her knowledge of God's plan to give Israel the land.

Secondly, Rahab welcomed God's grace. Hebrews 11:31 says, "By faith Rahab the harlot did not perish along with those who were disobedient, after she had welcomed the spies (God's grace) in peace."

Thirdly, Rahab acted according to God's revealed will. Rather than resist God, she submitted to God. She understood that the way to benefit from her knowledge of God's will was to align herself with its demands rather than resisting it.

Fourthly Rahab chose loyalty to God over loyalty to her kin and country. Rather than align herself with the perishable and transcient, she aligned herself with the eternal God and His works of righteousness in the world. In her choosing, she also interceded for her household, praying that they too may be saved.

Finally, Rahab complied with the rules of the passover (v.18-21) by tieing the scarlet code in her window. When God's Judgment came, the sign of blood provided for her deliverance and Salvation.

From her experience, we learn that it is never too late for anyone to receive God's mercy and grace. Secondly, it is incumbent upon us to act on the knowledge we have about God. Our actions reveal our faith.

Thirdly, it is not who we are, where we live, what we do, or who we know that determines how God deals with us. It is how we respond to the knowledge of God and His invitation to us that counts.

Fifthly, if we humble ourselves before God, our scary moments can become our salvation moments. You can imagine what Jericho residents thought when they saw the spies: "We are finished, they are here!" Not so for Rahab. She turned it into a moment of salvation for her and her household.

Finally and most importantly, we notice that Salvation is by God's grace through faith and not as a result of our works. To understand more on this last point I encourage you to read the book of Romans :)

So there you have it. A summary of the message from yesterday. I invited people in the service to respond whichever way they felt God was speaking to them. Two young girls aged about six came forward to the left side of the altar and knelt there for prayer by themselves. I went over to them and joined them briefly.

On the right side of the altar two ladies stood side-by-side with one lady in her thirties and pleaded I join them to pray for her as she had a broken heart. Next to them stood two gentlemen. As I prayed with one, he told me he has been coming to church for four years and he wants so desperately to know God's mission for his life.

And then as my wife was about to exit, a young lady came to her and requested for prayer for Salvation. Like Rahab, she was seizing the opportunity to embrace God's olive-branch and move from the fringes to the center.

How about you? What are you gonna do?

And yes, it is now just five days to go before we leave for Burundi. How is my faith in God's provision holding up in the face of our $ 19,000 need four days ago?