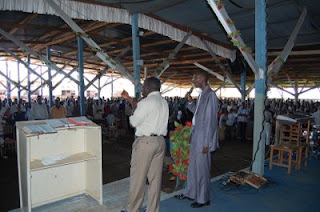 Last Sunday as I prepared to speak to some four thousand believers in Bujumbura, Burundi on the significance of Christmas, I was captivated by Luke's narration of the birth of Jesus Christ. In his narrative in the second chapter, he begins by laying out the historical context. Augustus was the Ceasar. Quirinius was the governor of Syria. What captivated me is the placing of these great historical figures and their assumed political power and wealth juxtaposition Joseph, a descentant of King David, by birthright a king, but dwelling in poverty and obscurity. Similarly Jesus, being divine royalty, is born in a manger.
Why didn't God in His sovereignty orchestrate things so that Jesus is born in Ceasar's palace rather than in a manger? If not in Ceasar's palace, why not orchestrate things so that Jesus is born in Quirinius' palace in Syria? The location of the birth of Jesus Christ, in a manger rather than in a palace, is obviously consistent with His entire mission. Firstly, being God, He became man so that He may save humanity from their sin. He did not come in His divine form but rather in human form. He did not come to dwell with the powerful and the connected. He came for the poor and the disconnected. The choice of a manger rather than a palace speaks of God's strategic bottom-up approach to human societal transformation. Joseph, Jesus' earthly father, was a king without a palace or political power. He was of the lineage of King David, yet he could not marshall enough recognition to secure a better place for the birth of Prince Jesus. He was a king without privilege or prefferement.
How contrary this is to our modern kings (leaders) who demand privilege and prefferement. How different it is from todays celebrity culture! Jesus' own poverty at birth speaks to the poor in spirit that are blessed at His inaugural address, "Blessed are the poor in Spirit, for theirs' is the Kingdom of Heaven" (Matt 5:2). Whereas the proud and the arrogant exclude themselves from the mercy and favor of God, the poor, the needy and the humble are invited. Finally, the unimpressive location of the birth of Jesus Christ speaks to those who are down-trodden that all things are possible for them who believe. God, in sending His Son to be born to poor peasants, did not leave out the influential and powerful. He sent the magi from the east laden with gifts. They were rich, yes, but they were also humble enough to obey God. Clearly, God's vision is not to rid the world of people who are doing well. Rather, it is to elevate all people to embrace true joy and salvation. In Christ, the poor and the rich are all included as part of His salvific mission. Granted they acknowledge their poverty of soul. Rather than God's salvation being one dimentional, it is a holistic salvation. The coming of Jesus calls all to arise from their place of complency and mediocrity and to embrace the New Life full of hope and meaning. God with us, Immanuel, means that nothing is impossible. With God, all things are possible to them who believe.

Yes I am back to Blogging

December 23, 2019
I've been gone from blogging for several years now.  I am glad to be back.  I am looking forward to keep this blog alive and well.  So much has happened since my last blog.  In addition to the global work of evangelism, we launched a new work here in the Twin Cities.  The initiative is called Merge. More on why the name Merge later. Yes, we have been busy as ever sharing the Good News with thousands around the world. But more so, in the last two years God has shown us that the Nations are also right here in our own backyard.  Over one million first and second generation from over one hundred nations in the Twin Cities alone. Our cities are more and more global. The people speak multiple religious languages.  They carry multiple national identities.  They fall in different social and cultural groups. With such diversity of peoples at our door step we must ask the question: Is the "Great Commission" still Great? Is Jesus' command given a couple millennia ago to &
Post a Comment
Read more